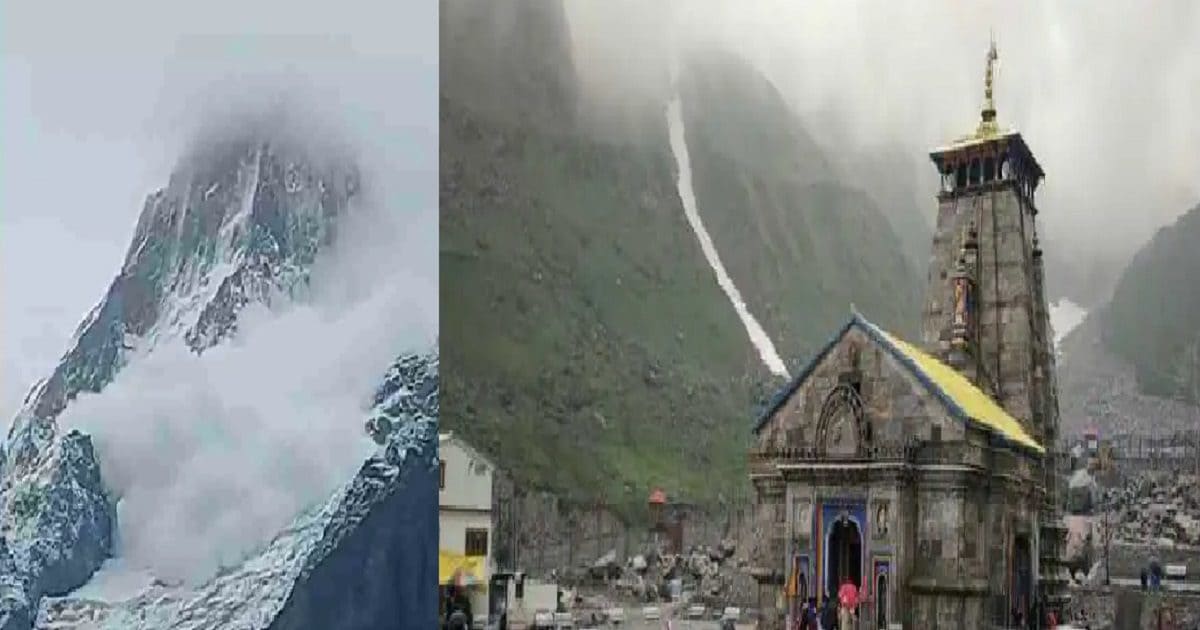 Dehradun: An avalanche occurred in the mountains around the holy Kedarnath temple around 6:30 pm on Thursday. In a video going viral on social media, it is seen that snow is rapidly rolling down from the hills located behind the temple. Seeing this, the brown mountain is covered in a white sheet of snow. The area prone to avalanche is known as Chorabari Glacier Catchment Area. This place is situated at a distance of 5 kms from Kedarnath temple complex. There is no news of loss of life or property in this avalanche. Officials are closely monitoring the situation. Let us tell you that the weather in Kedarnath Valley has been very bad for the last few days and it is raining heavily.

This is the same glacial lake in the Himalayas that was in spate in 2013 and caused the most devastating floods in Uttarakhand in modern times. In June 2013, Uttarakhand received unusual rainfall, causing the Chorabari Glacier to melt and the water level in the Mandakini River reaching disastrous levels. This horrific flood affected a large part of Uttarakhand. Reportedly, the maximum loss of life and property was done in Kedarnath Valley. More than 5,000 people died in this heart-wrenching natural disaster. The Kedarnath temple complex was badly damaged, however, the main temple was not damaged.

SubscribeTELEGRAM: https://t.co/Uw6hADCvaz
An avalanche in Kedarnath is a village in the Himalayas, in the Rudraprayag district of the Indian state of Uttarakhand. India#kedarnath #Avalanche pic.twitter.com/5Vegf5fVMA


In fact, a giant rock had slipped and stood just behind the temple, due to which the water’s edge split and the temple was saved from being damaged. After this tragedy, Prime Minister Narendra Modi laid the foundation of Kedarnath Dham Redevelopment Project under his supervision. Under which the entire temple complex was resettled. Special arrangements were made for the convenience of the devotees in the Dham. All kinds of development related work was done. Pucca ghats were built on the banks of the surrounding rivers. The watercourses were preserved. Helipads, hospitals, lodges for travelers, shelters for pandas and priests were built. Adishankaracharya Memorial was built. At present, the work of plating gold in the sanctum sanctorum of the temple is going on.

The danger of Glacial Lake Outburst Flooding (GLOF) is increasing in the Himalayas. Over the years, several GLOFs have been the cause of flash floods in the Himalayan regions, causing massive damage to infrastructure, while killing thousands of people. Recent studies have found that most of the glaciers in the Himalayan region are melting rapidly with climate change. Between 1935 and 1996, the average rate of glacial retreat was 20 meters per year, which has since increased to 38 meters per year. Studies suggest that glacial melting has accelerated in the past decade with the retreat of Gangotri by about 300 meters.