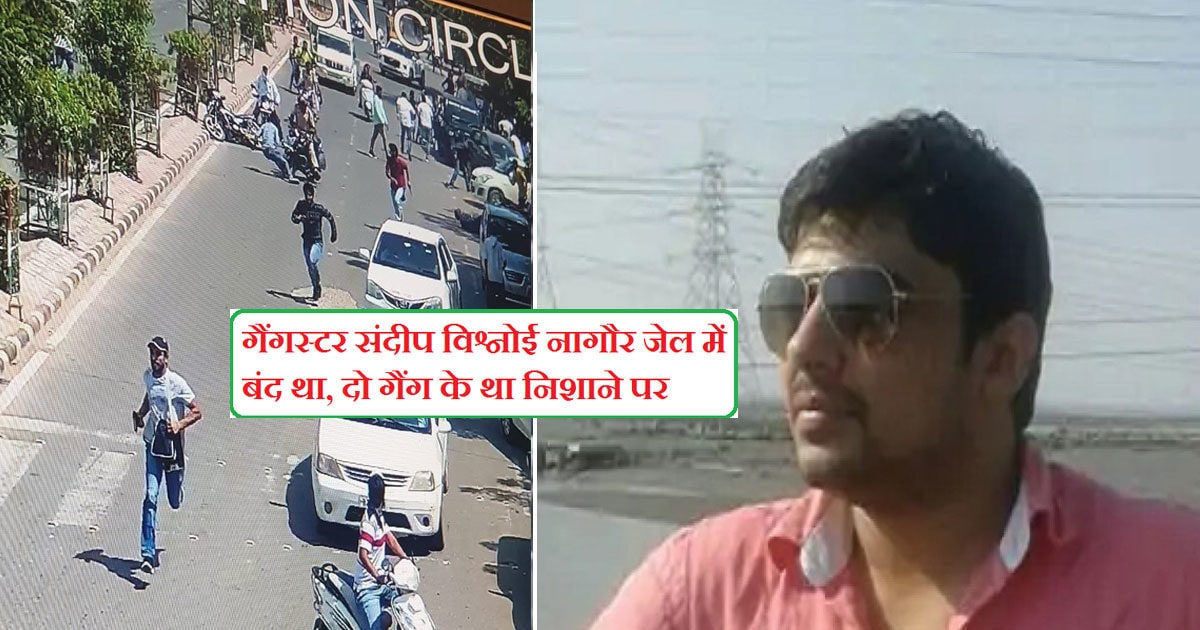 Jaipur. Gangster Sandeep Vishnoi (Sandeep Vishnoi Murder News), who reached the court in Nagaur, was gunned down by the shooters in the car on Monday. The shooters had come from Haryana in a black colored Scorpio. He chased Sandeep and then fired from close range. Fired a total of ten rounds. Sandeep died on the spot while two of his companions were seriously injured who were referred to Jodhpur. A lawyer was also injured in this attack. Sandeep himself was a notorious gangster and betel nut killer of Haryana. Sandeep Vishnoi’s name came up for the first time in the murder case of Nagaur on November 29, 2019, three years ago. During interrogation, it was revealed that a woman had hatched a murder plot to avenge her husband’s murder. The woman had given a betel nut of 30 lakhs to Sandeep Vishnoi for the murder. Gangster Sandeep Nagaur was lodged in jail in this case. He was associated with the Sethi gang. According to police officials, he used to kill betel nut along with smuggling liquor. He had also murdered a businessman in Nagaur.

The Bambiha gang took responsibility for the murder of Sandeep, but the Deepti gang was also under police investigation. The question is whether the two gangs committed the murder together. One gang carried out the racket and one carried out the murder, the investigation is going on. After all, how did Sandeep become such a big gangster and what was his enmity with the Deepti gang of Haryana. There is an old enmity between Sandeep’s Sethi gang and Haryana’s Deepti Singh Yadav’s Deepti gang. Both were involved in the business of smuggling liquor. There was a war of supremacy between the two regarding the liquor business. There have been clashes in both the gangs over illegal trades.

This enmity turned into a bloody gang war when Deepti Yadav’s friend Sandeep Godara was murdered by the Sethi gang in 2015. Since then, the Deepti gang was in the process of killing Sandeep Vishnoi. The animosity between Sandeep and Deepti started 15 years ago in college. In 2007, a fight broke out between Sandeep Vishnoi and Deepti’s friend Sandeep Godara at Jat College in Hisar, Haryana. From here the enmity started. In 2011, Deepti Yadav was fired upon outside Jat College in Hisar. Sandeep Vishnoi was accused of firing. Deepti then decided to take revenge on Sandeep.

Sandeep Vishnoi feared that Dipti would avenge the murder of his friend Sandeep Godara, so Sandeep took Lawrence’s help. Befriended Lawrence. Then through Lawrence befriended gangster Raju Fauji. After the murder of Sandeep Godara, Ferrari was also cut near Raju Fauji in Barmer.
Raju Fauji and Sandeep had a good friendship
It was revealed in the police interrogation that gangster Sandeep had given many weapons including revolver, pistol to Raju Fauji. Smuggler Raju Fauji and gangster Sandeep Vishnoi, who killed two constables in Bhilwara, were special friends. It was Sandeep who gave weapons to Raju Fauji for killing the policemen. Sandeep had told the police during interrogation. After the constable’s murder, the soldier stayed with him in Haryana. However, it is not yet revealed who had sent the shooters to kill Sandeep and whether it was a gang war.