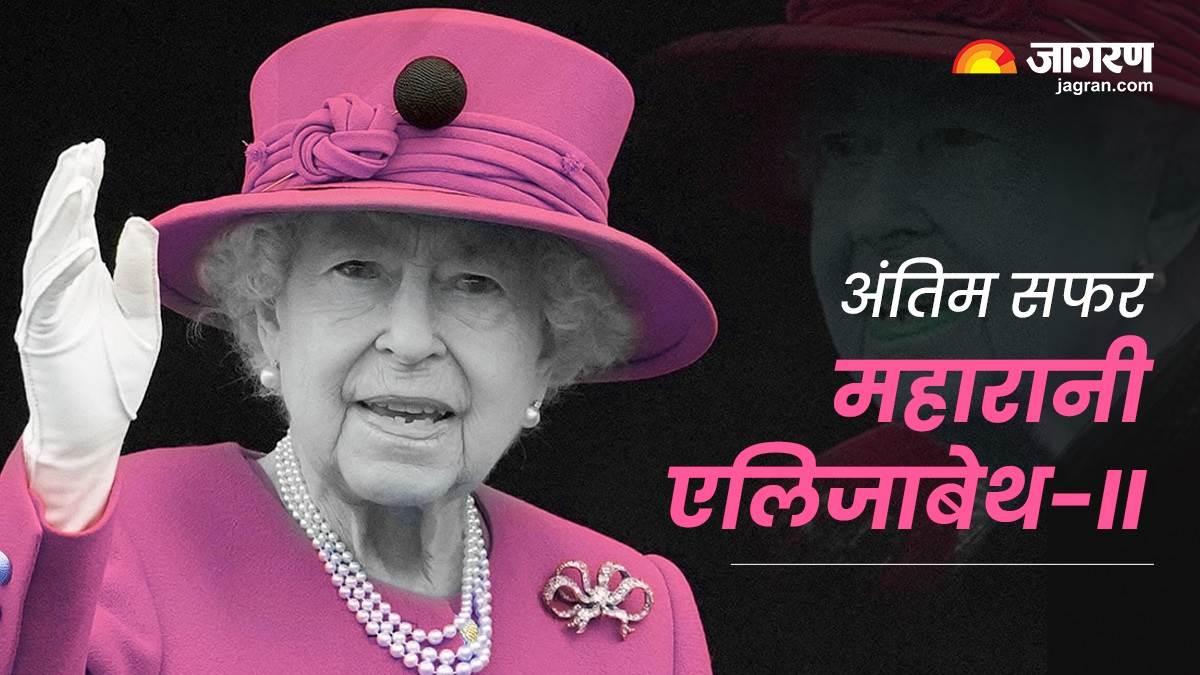 The Lord Chamberlain, the most senior official in the British royal household, broke a stick known to the royal family as the ‘office wand’ and hundreds of mourners bid farewell to the Queen. Andrew Parker, the former head of Britain’s domestic secret service MI5, broke the white stick and placed it on the Queen’s coffin. This ritual is believed to mark the end of his service to the emperor. Please tell that 800 people were involved in the mourning service in the chapel.

More than two thousand leaders, dignitaries and lakhs of others from India and abroad bid farewell to the Queen’s body with moist eyes. In this time of farewell, something happened which had never happened before. The music that was played at the Queen’s wedding in 1947, the same music played six years later at her coronation in 1953, and the same music is now played at her funeral. The mournful atmosphere was also presenting signs of grandeur at every step.

One of the highlights of Queen Elizabeth’s 70-year reign was that since last Wednesday, people from dozens of countries came to Britain to pay tribute and farewell to her. Among them is that autonomous part of the world like Taiwan, where the Queen probably never went, nor did Britain recognize her autonomy. The Queen’s contribution to strengthening the monarchy as well as the democratic system in the United Kingdom (England, Scotland, Wales and Northern Ireland) and 14 other countries cannot be forgotten.

The Archbishop of Canterbury, Justin Welby, referred to the Queen’s personality in the last prayer. He told why people loved him. King Charles also felt the warmth of the love attached to his mother. Said, the love and support of the people is heart touching. The body of the Queen, who was the center of public reverence for nearly five days, left Westminster Hall on Monday morning on her last journey. The soldiers of the British Navy were pulling the coffin of the Queen kept on the artillery.

Lakhs of people attended the funeral

The funeral procession, which began with full national honours, saw most people for the first time in life see such a large number of British soldiers in the attire worn at a royal event. These soldiers were walking step by step to the tune of the marching band. The famous Big Ben bell was also ringing after every minute. King Charles and all the senior members of the royal family were walking behind the artillery. While lakhs of people stood calmly on both sides of the road to bid their last farewell to the Queen.

Following the funeral procession at Westminster Abbey, the Queen’s body was flown to Wellington Arch and from there to Windsor. People present everywhere on both sides of the road sent off the Queen in a gloomy atmosphere. The Queen’s body was traditionally handed over to the earth at St George’s Chapel in the Windsor Palace complex. The Queen is buried next to husband Prince Philip.

As The Queen’s Committal Service comes to a close, Her Majesty’s Piper plays a lament. pic.twitter.com/4DVIUuCoPO

Queen Elizabeth II’s funeral is underway at Westminster Abbey, where 2,000 mourners are gathered to say goodbye to Britain’s longest-reigning monarch.

Queen Elizabeth lies in the lap of the earth

Feeling emotional at the burial of Queen Elizabeth II. With the funeral of King Charles III, Queen Elizabeth II’s personality became a part of the pages of history. The coffin of the Queen is lowered into the Royal Vault at Windsor Castle.

Let us tell you that many people were present near Windsor Castle to pay tribute to the Queen. The King and his royal family were present at the King George V Memorial Chapel for the Queen’s burial. The Queen’s beloved dogs, Muick and Sandy, were also present at St. George’s Chapel.

Queen Elizabeth II has completed her final journey to St George’s Chapel, where she will be laid to rest alongside her husband Prince Philip, Duke of Edinburgh.

Her late Majesty was welcomed to Windsor Castle by her personal riding horse, Emma, ​​and her corgis, Muick and Sandy. pic.twitter.com/Q5PSPAlJRI

The Queen’s coffin passed in front of Buckingham Palace for the last time while carrying Wellington Arch.

British Prime Minister Liz Truss John also read a Bible book on the occasion of the Queen’s funeral. He recited a passage related to Jesus Christ’s promise of a place in heaven to his followers. Let us tell you that Queen Elizabeth II was born in Westminster Abbey.

#WATCH , London: British Prime Minister Liz Truss gives the second reading from the scripture of the Gospel of John. The passage concerns Jesus Christ’s promise to his followers of a place in heaven.

Queen Elizabeth II has been born at Westminster Abbey. pic.twitter.com/9R9BKFDoGl

A two-minute silence was observed across the UK

A two-minute silence was observed across the UK to mark the funeral of Queen Elizabeth II.

A wreath was placed at the top of the Queen’s coffin at the request of King Charles III. The wreath included leaves of rosemary, English oak and myrtle and cut flowers from the gardens of the Royal Residences.

The card written by King reads, ‘In his love and memory, Charles R.’

At King Charles III’s request, the wreath on top of Her Majesty The Queen’s coffin contains foliage of Rosemary, English Oak and Myrtle and flowers cut from the gardens of Royal Residences.

The card, written by the King, reads: “In loving and devoted memory, Charles R.” pic.twitter.com/68WreS4SSH

The Queen’s Consort, The Princess of Wales, Prince George, Princess Charlotte and other members of the Royal Family arrived at Westminster Abbey for the Queen’s funeral.

The Queen Consort, The Princess of Wales, Prince George, Princess Charlotte and other members of the Royal Family arrive at Westminster Abbey for the funeral of Queen Elizabeth II. pic.twitter.com/LsaoebfpnW

Many politicians from around the world visited Westminster Abbey

The funeral service ended at 4:25 pm, after which a silence of two minutes was observed. After this, the Queen’s coffin would be taken out on the streets of London, a cannon salute was given every minute and the Big Ben bell was also rung every minute.

Queen died at the age of 96

Queen Elizabeth II died on 8 September at Balmoral Castle in Scotland at the age of 96. More than 500 delegates from different countries attended the funeral ceremony of the Queen. Following the funeral of Queen Elizabeth, Britain’s new King Charles III announced a week of public mourning across the country.

Queen Elizabeth II is buried next to her husband, Prince Philip, in the King George V Memorial Chapel. Tight security arrangements have been made during the funeral, more than 5000 soldiers were deployed everywhere. The soldiers of the Army, Navy and Air Force participated in it. Let us inform that President Murmu reached Britain on a three-day visit from 17 to 19 September.